At TrueCore Federal Credit Union, our mission is to enrich our community, and we’d love to serve you.  We are member-owned, and our not-for-profit structure allows us to return excess earnings to those who bank with us in the form of better rates, lower fees, and more services.
Those who reside, work, attend school, worship, or volunteer in Licking County may become a member.  There is no membership fee, and once you are a member, you can always be one.  We invite you to be part of our family.
In the video below, President-CEO, Jay Young, and Director of Marketing, Shani Smith-Reed, discuss the origins of TrueCore and their continued commitment to the Licking County community.  It was originally created for the Licking County Chamber of Commerce Groundhog Breakfast in Newark, Ohio, on February 1, 2019:
Stopping by to open a new account? Click here to view what to bring with you.

After the Great Depression hit and Franklin Roosevelt took office in March of 1933, he faced a bank crisis. People were very worried about the safety of their money. They feared that more and more banks would fail. FDR signed the Federal Credit Union Act in the middle of the night on June 26, 1934. The Act allowed credit unions to form anywhere in the United States.
Also in the 1930's, the vision of glass fiber insulation became a reality. The Great Depression dragged on for a few more years, but the first "glory days" of Owens Corning were just beginning. On October 31, 1938, papers incorporating the fiber glass operation as a separate company were filed, and it became the Owens-Corning Fiberglas Corporation. The employees of Owens Corning then decided to establish their own credit union within the Newark, Ohio plant. So in the year 1940, Fiberglas Federal Credit Union was formed. 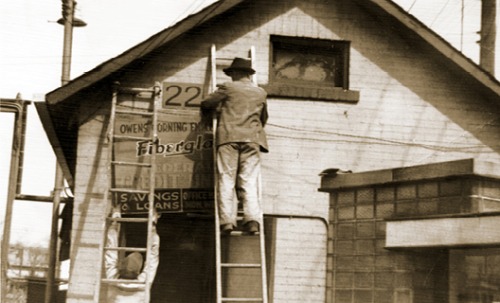 Our first office.
On February 1, 2015, Fiberglas Federal acquired the members of Cardinal Federal Credit Union. Cardinal originally came to exist in 1965 when Licking County teachers united to save and borrow together. Given Fiberglas Federal’s new ability to serve all of Licking County, coupled with the Cardinal merger, it was time for a new name that communicated the fact that they were now able to reach out and help more members of the community. It was important  that this new name embraced the commitment to stay true to the credit union’s core values: Integrity, Innovation, Service, and Community.  And with that, TrueCore Federal Credit Union was born. TrueCore is the largest credit union in Licking County, and individuals are eligible to become a member if they reside, work, attend school, worship, or participate in associations headquartered in Licking County.

Giving back to the community has always been a priority at TrueCore. Learn more about our 501 (c)(3), non-profit organization.
About TrueCore Foundation